Amazon has confirmed to Daily Hive Urbanized that it has acquired 86-168 Southeast Marine Drive – a 12.5-acre property just west of the foot of Main Street that was once sought after for a huge Walmart store.

The property has been sold by local developer Hungerford Properties, which previously told Daily Hive Urbanized that as recently as September 2021 the City of Vancouver was considering its bid to pursue its own mixed-use development.

Records retrieved show Hungerford Properties sold the land to Amazon on Dec. 17, 2021, and according to commercial real estate firm Avison Young, the deal was worth $150 million.

Hungerford Properties said it was unable to comment on the sale for confidentiality reasons, and Amazon notes it has no specific development plans to share at this early planning stage.

Given the zoning, the property could potentially be used for Amazon logistics-related operations, such as developing a warehouse for a fulfillment center, sorting center, or delivery station.

Amazon is known for renting the space it needs around the world for its vast operations, but in recent years, buoyed by the company’s immense growth due to pandemic-related demand, it has turned towards buying more properties, especially industrial sites for warehouses. 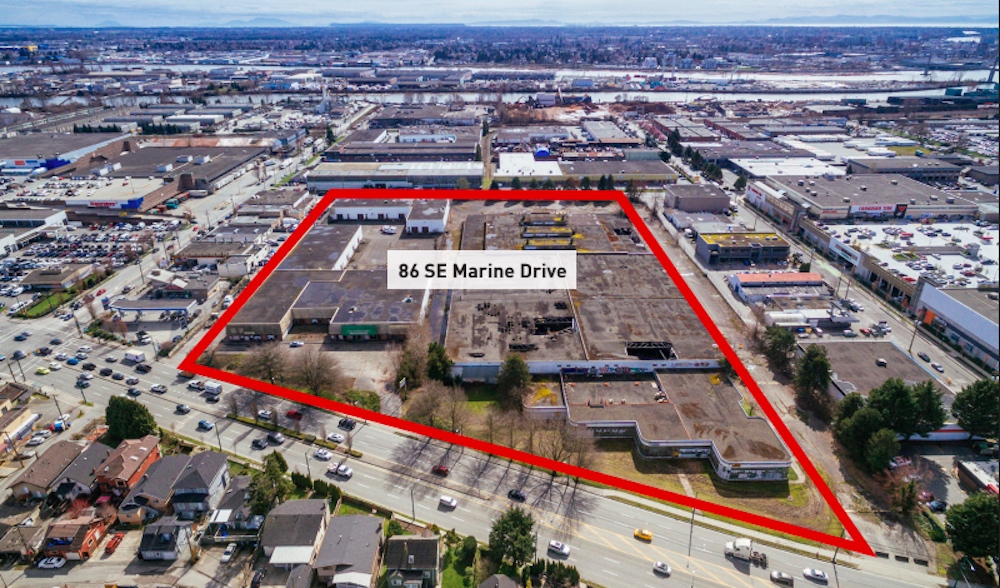 The property at 86-168 Southeast Marine Drive, Vancouver, before the buildings were demolished in 2019. (Hungerford Properties)

Industry reports have noted that Amazon and other logistics-focused companies are increasingly turning to buying their own warehouses, especially where markets for industrial space are particularly tight.

Metro Vancouver is the epitome of this growing shift towards ownership of industrial space. The vacancy rate for leasing industrial space was just 0.5% in the second quarter of 2022, which is the lowest of any major urban area in North America. According to Avison Young, the region’s industrial vacancy rate has hovered around 1% vacancy for the past six consecutive quarters (since late 2020) and below 2% for the past six years.

These low vacancy rates pushed industrial lease rents up. Some companies are looking to acquiring industrial space as a “potential hedge against continuing to rapidly increase rental rates” in Metro Vancouver.

Real estate acquisitions also allow for better long-term security and the ability to avoid disruption to operations, which is especially important for logistics companies. Such a strategy allows Amazon to focus on growth, instead of making up for lost capacity when it comes to the end of non-renewable leases. The company has opened a dozen logistics warehouse spaces in the region over the past decade.

For example, Amazon’s YVR3 fulfillment center, opened in 2012, at 109 Braid Street, next to the SkyTrain Braid station in New Westminster, is on leased property. In the medium term, the company will have to vacate this site as it is being considered for mixed-use development by developer QuadReal Property Group.

Significant additional new industrial space totaling millions of square feet of floor space is planned in the short to medium term, but the vast majority of this new space in the region is already pre-leased.

Hungerford Properties has acquired 86-168 Southeast Marine Drive from Walmart, ending the discount retail giant’s 20-year ownership history with the property. Shortly after the acquisition, the developer demolished low-rise buildings constructed in the 1950s that had previously been used for a Dueck car dealership. The value of the deal with Walmart is not known.

In September 2001, Walmart submitted a rezoning application to the City of Vancouver to redevelop 86-168 Southeast Marine Drive as its first store in the city. 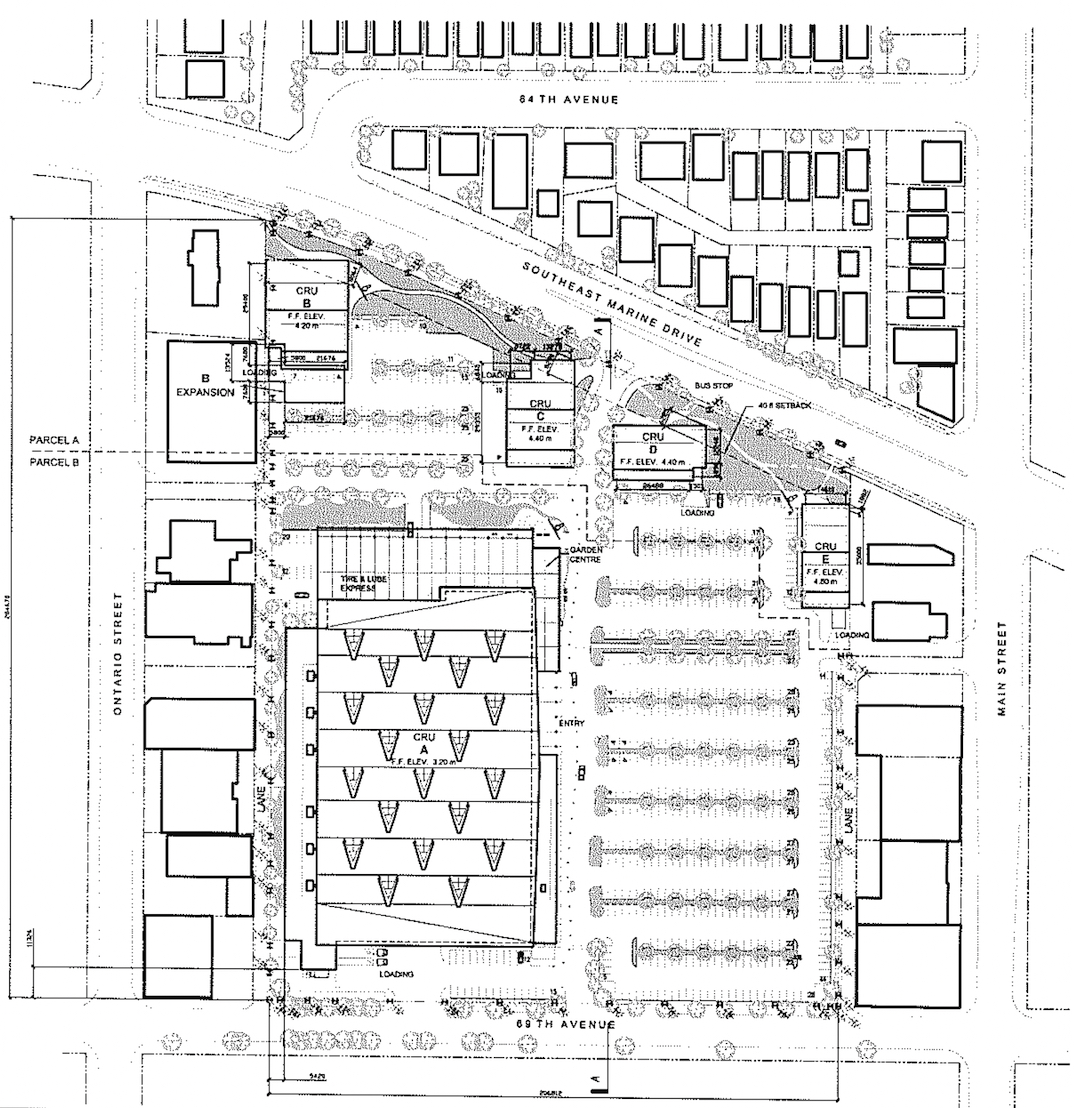 The rejected design in 2005 of Walmart’s proposal to open a store at 86-168 Southeast Marine Drive, Vancouver. Surface vehicle parking lots are located on the north and east sides of the property, while commercial buildings and stand-alone restaurants are located along Marine Drive. Click on the image for a larger version. (Perkins & Will/Walmart Canada) 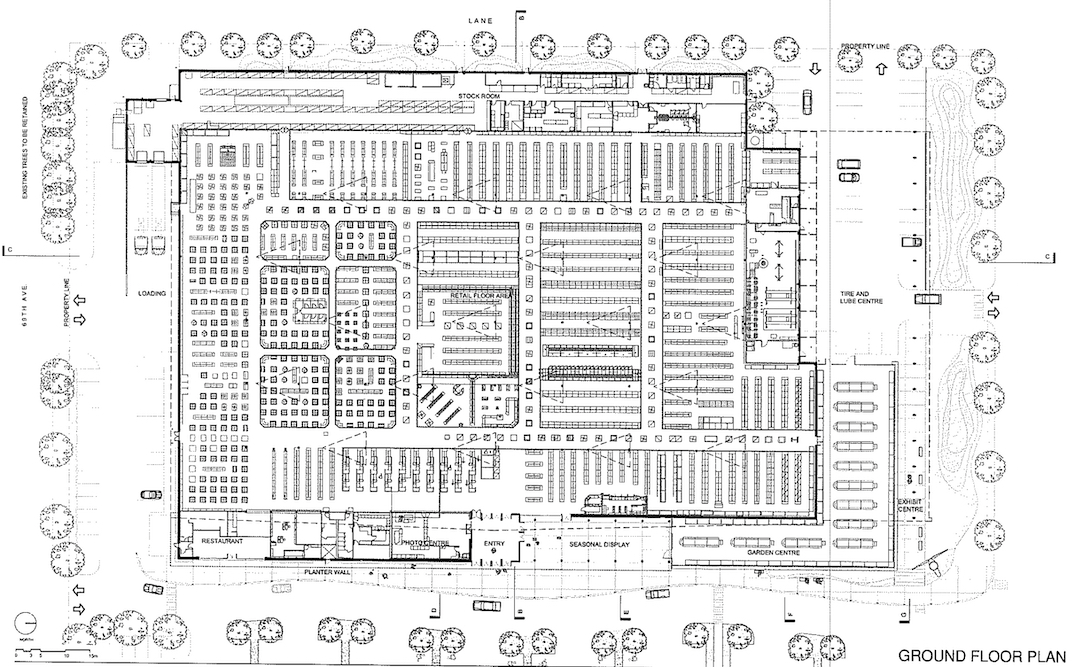 The rejected design in 2005 of Walmart’s proposal to open a store at 86-168 Southeast Marine Drive, Vancouver. Here is the interior layout of the store. Click on the image for a larger version. (Perkins & Will/Walmart Canada)

But the store proposal became a protracted battle with the city government, with the city council rejecting the proposal four years later due to the perceived negative economic and environmental impacts the multinational discount retail chain would have on local businesses. and the community at large.

The proposal was considered at the end of Walmart’s period of rapid expansion in the United States, Canada and several other major international markets between the early 1990s and early 2000s. more criticism at the time of Walmart’s sudden impact on local businesses, especially in smaller communities, as well as environmental concerns, automobile traffic congestion, and low wages.

Because of this, the city commissioned Walmart to conduct a retail impact study in 2002, and it was determined that the store would have no negative impact on other retail areas except from Fraser Street. The study found that Walmart would primarily compete with other big box stores, such as the nearby Superstore to the east.

To help address environmental concerns, Walmart’s store design featured a high degree of green building features that were new to the company’s store design standards at the time. 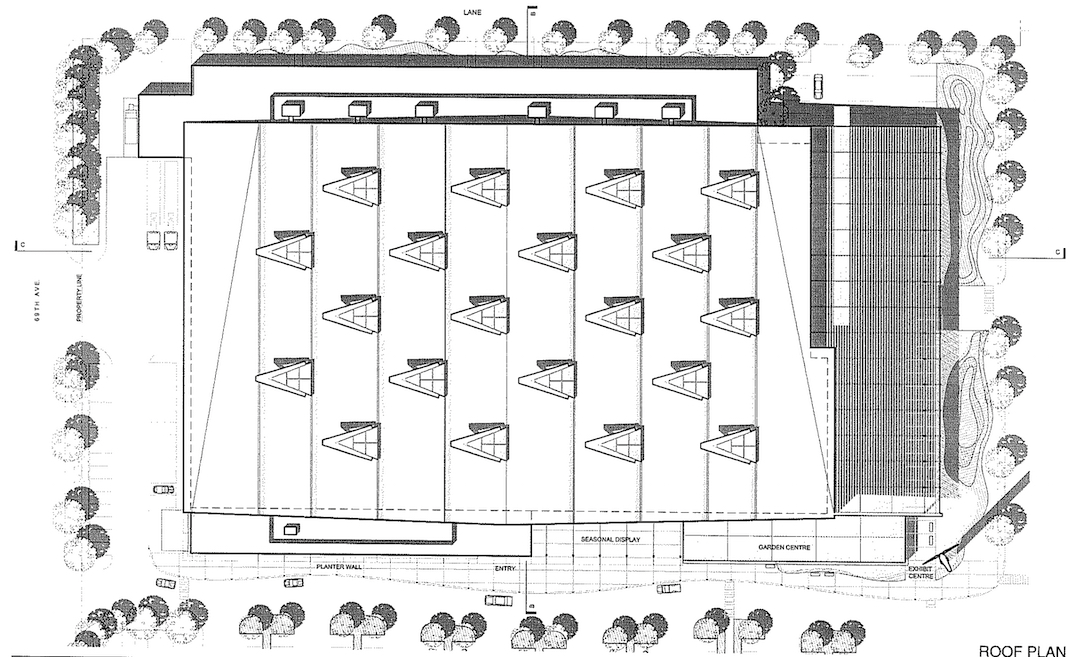 The rejected design in 2005 of Walmart’s proposal to open a store at 86-168 Southeast Marine Drive, Vancouver. The green roof and skylights are clearly depicted. (Perkins & Will/Walmart Canada)

Walmart proposed to incorporate a large green roof, geothermal systems and even a wind turbine. There would also be numerous skylights on the roof to allow natural light in, natural ventilation systems, extensive planting and new trees, a biofiltration pond and semi-permeable materials for rainwater on the surface car park. It was all part of the strategy to achieve a minimum LEED Gold green building standard, establishing the greenest big box store in the world.

Additionally, Walmart pledged to consider operating a shuttle service for customers to the future nearby Marine Drive station on SkyTrain Canada Line, target sustainable products and practices, and engage in partnerships with local non-profit organizations to develop an on-site urban agriculture program.

But the city council at the time was unmoved by Walmart’s proposal, and in June 2005 the request was rejected by an 8-3 vote by the majority of the COPE party. Some of the city council’s criticism of the proposal has focused on the multinational chain’s operations and working practices, not the details of the building application.

Walmart then opened its first store within Vancouver’s municipal limits in 2009, after renovating a 122,000 square foot warehouse built in 1955 at 3585 Grandview Highway, previously occupied by Costco.

In 2016, Walmart Supercentre opened in a purpose-built new building in North Richmond, just across the river from the rejected location of Walmart’s Vancouver Marine Drive store.

1 day ago Oretha B. Deloach

5 days ago Oretha B. Deloach